What is Autism?
In the new diagnostic criteria due for release in May or June 2013, autism has been moved from the category of Pervasive Developmental Disorders into a new category, Neurodevelopmental Disorders.  This is a more accurate category for autism as research continues to prove that autism is a brain disorder with multiple regions of the brain affected.  Autism, Asperger’s Disorder, PDD-NOS, and several other disorders have been merged into what is now being called Autism Spectrum Disorder.

Symptoms of autism include some or all of the following:  impaired social interactions, impairments in communication, and repetitive and stereotyped patterns of behavior, interest, or activity.  These all begin before a child is 3 years old.  Autism affects information processing in the brain by altering how nerve cells and their synapses connect and organize; how this occurs is not well understood.

How common is it?  The incidence of autism has increased to one in 88 kids in the year 2008 from 1 in 150 in 2000 and affects about 4 times as many males as females.  This increase is partly due to changes in diagnostic practice; the question of whether actual increase has occurred is not resolved. Some theorize that increases have occurred due to older birth parents, family predisposition, environmental factors such as heavy metals and pesticides, and a combination of these.

How is Autism assessed?  A thorough assessment involves using clinical and neuroscientific knowledge to look at symptoms, neuropsychological and cognitive testing, and neurophysiology of the brain. A computerized normative test battery can assess attention, memory, and executive function. A common rating scale such as the Autism Treatment Evaluation Checklist (ATEC) is available free on-line and helps rate and track symptoms. A Quantitative EEG (QEEG) compares the electrical functioning of the brain to normative databases and can pinpoint exactly where the brain is not functioning normally. 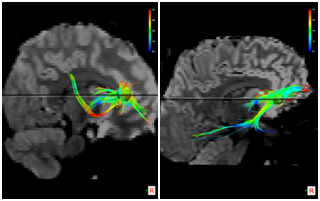 Is there a difference in the brain of an autistic person? Yes it turns out there is. Recent brain imaging research using diffusion tensor imaging (DTI) shows neuronal pathways that don’t connect the front and the back of the brain in normal ways in autism. The DTI on the left shows a brain with autism and on the right without. QEEGs show hypercoherence in the frontal lobes and hypocoherence between the front and the back of the brain which means areas of the brain are too connected or not connected enough and therefore not communicating properly. A mirror neuron deficit may also be seen as indicated by a suppression deficit in the mu rhythm.

The really good news is that various forms of Neurofeedback have proven to be helpful in decreasing symptoms of Autism. QEEG connectivity guided Neurofeedback has had superior relative effects. Rob Coben, PhD, an expert in Autism and Neurofeedback, has published research on the connectivity issues present in Autism.  He reports that ‘a complete course (at least 40 sessions) of this type of Neurofeedback leads to indisputable improvements with an average of 60% symptom reduction (30-90%) and a success rate of 98%.’  None of the other treatments reported such impressive efficacy.

It is important to keep in mind that although there are some common autistic symptoms, each child with Autism is unique and needs an individually tailored treatment plan.  This may include a variety of treatment modalities.  Based on the latest research and efficacy, it would be wise to include QEEG connectivity guided Neurofeedback in the mix.